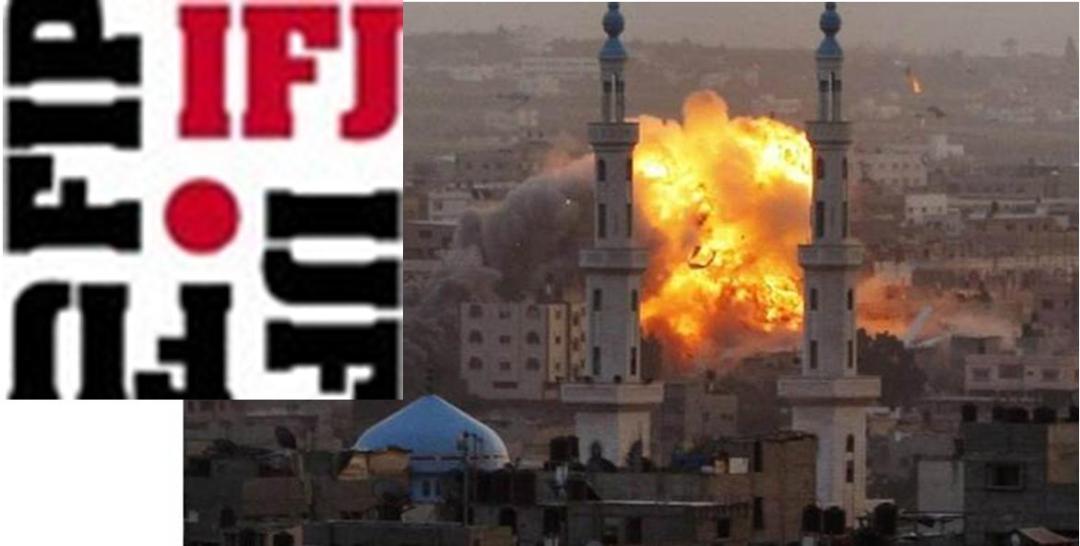 The International Federation of Journalists (IFJ) today accused the Israeli Defence Forces of waging war on journalists in Gaza. The Federation was reacting to yesterday’s strikes which killed three journalists who were travelling in their cars, with press signs, in two separates incidents in Gaza city. “This latest deadly attack targeting journalists is clear evidence that the Israeli military has declared war on journalists in Gaza,” said Jim Boumelha, IFJ President. “There can be no more lame excuses from the Israeli Air Force that it was targeting its enemy’s communications. The army which claims its strikes are surgically precise must have known there were journalists in this car and it should be accountable for what appears to amount to a war crime.”
[Full statement at link above]

Journalists’ leaders representing 14 journalists’ syndicates and associations in the Arab World currently gathered in Abu Dhabi, United Arab Emirates, strongly condemn the attacks of the Israeli occupation forces in the Gaza Strip and the deliberate targeting of journalists and media staff. The participants, gathered to discuss press freedom in the Arab World and the protection given for killers of journalists and impunity, condemn and denounce the Israeli army’s deliberate attack on the headquarters of media organizations in Gaza on the morning of the 18th of November 2012, in particular ‘Quds TV’. The attacks injured at least six journalists, including photographer Khader al-Zahar, who lost his leg as a result.
[Full statement at link above]

The International Federation of Journalists (IFJ) today called on the international community to investigate deliberate attacks by Israeli military against media buildings in Gaza. At least six journalists were injured, including cameraman Khader al Zarah who lost a leg after their offices came under sustained bombing from Israel’s military which targeted in the early hours of Sunday Al Shawa and Husari where several media organisations, including Hamas’ TB Al Quds TV, Al Qudsa radio, Maan network and many other radio stations are based. Another media facility, the Asshurouq building, which houses Sky, ITN, Al Arabiya TV and Abu Dhabi TV was also attacked.
[Full statement at link above]